On Sunday, Marc Kopp, a 55-years-old French man with multiple sclerosis became the first disabled person to sky-dive over Everest. 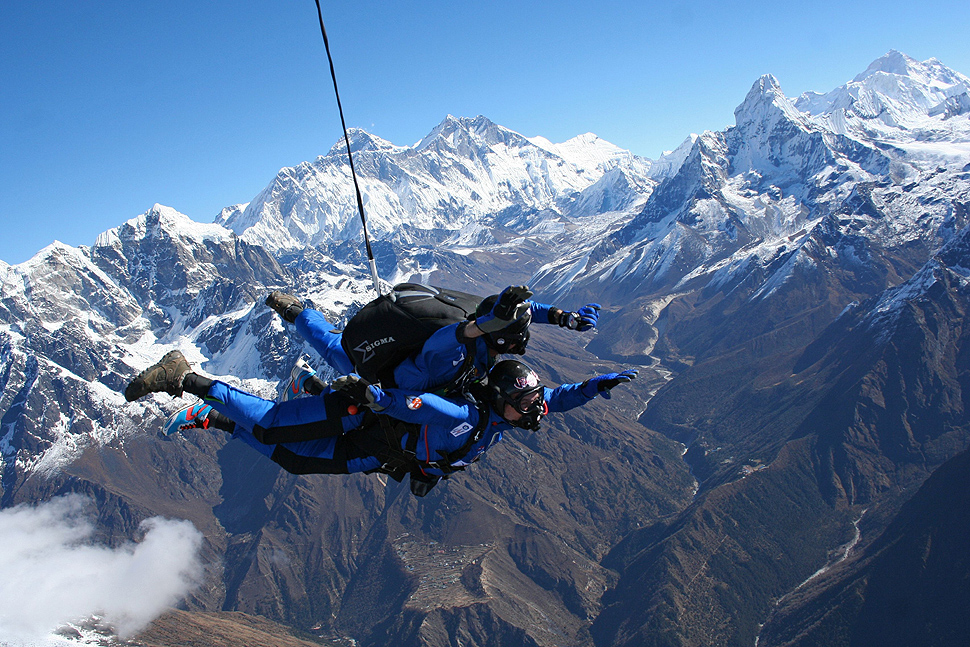 Marc Kopp who lives in Longwy in France wanted his achievement to send “a message of hope” to others with Multiple Sclerosis.

He has lived with MS for over ten years, after being diagnosed in 2001 with primary progressive multiple sclerosis (a form of Multiple Sclerosis with almost no chance of remission).  Speaking prior to the jump, Kopp said: “I felt like I would send a message of hope. Even if you are sick, you are still alive.”

There is no doubt that Kopp felt truly alive when he jumped from the helicopter at 10,000 metres (32,800 feet) and experienced free-fall over Nepal’s Mount Everest Region.

Kopp was accompanied by champion sky diver and friend Mario Gervasi for the tandem sky-dive.

After a successful landing, Kopp was taken to a hospital in Kathmandu as a precautionary measure. From his hospital bed, he said: “I feel very happy. I am exhausted but very happy.”

It is no wonder that Kopp felt exhausted. Not only did the daredevil have to comedown from the adrenalin rush but in order to reach the airstrip for the jump, Kopp had to travel on horseback across the Himalayas for several hours a day. An experience he found very painful, especially as he normally uses a wheelchair to get around.

Kopp is determined to not become a victim of MS. As his condition worsened, he began volunteering for a support group for other people with MS. Kopp is a real inspiration and the Everest jump was just another way he could should others what could be achieved.

“I hope my action will inspire others living with this illness. I hope many more will follow in my footsteps,” Kopp said.

Multiple Sclerosis (MS) is a disease affecting nerves in the brain and spinal cord, causing problems with muscle movement, balance and vision.

Each nerve fibre in the brain and spinal cord is surrounded by a layer of protein called myelin, which protects the nerve and helps electrical signals from the brain travel to the rest of the body. In MS, the myelin becomes damaged.

This disrupts the transfer of these nerve signals, causing a wide range of potential symptoms, such as:

If you have MS and want to find out more about how Your Life Protected can use their specialist knowledge to get the best MS life insurance cover then fill out a free quote form or call 01275 404268.